INTRODUCTION
Nowadays, the greatest challenge of the aquaculture industry is to maximize yield production to meet the customer demand. Major trends to reach this objective induce intensification of the production systems and species diversification, which lead to diseases outbreaks, introduction and spread of new pathogens. This pathogenic pressure significantly impacts the economics of the farmers. In recent years, chemical solutions like antibiotics have been applied. However the massive use of chemicals in aquaculture is nowadays a high public health concern since antibiotic resistance and dramatic effects on environment appeared. Active research has been undertaken in this field to explore alternatives to antibiotic treatments. The present research aimed to evaluate the potential of a natural phytogenic based on specifically selected plant extracts (commercial name “A-Live” and supplied by MiXscience, France) to control a broad spectrum of pathogens in aquaculture systems from laboratory to farm scales. The antimicrobial effects of the phytogenic have been investigated both in vitro and in vivo. MATERIAL AND METHODS
In vitro, Minimal Inhibitory Concentration (MIC) and Minimal Bactericidal Concentration (MBC) of the product have been determined using microdilution methods against a wide range of pathogen from seawater and freshwater aquaculture systems. The MICs were compared to natural extracts known to have high antimicrobial potential: citral, isolated from citrus oil, eugenol, from cloves oil and carvacrol, from oregano and thyme oils. Finally, in order to evaluate the real potential of this product as antibiotic alternative, MIC and MBC were compared to common antibiotics used in aquaculture (oxytetracyclin, erythromycin and enrofloxacin). Based on these preliminary studies, the product was then applied in challenge trials where the targeted species were either freshwater fish or shrimp. In vivo trials have been run in indoor 100 L tanks at the laboratory scale for Nile tilapia Oreochromis niloticus (in aqua research center, France) and  indoor 115 L glass aquariums for white shrimp Litopenaeus vannamei (in aqua university, Thailand). Fish were exposed to Streptococcus spp whereas shrimp were challenged with either Vibrio parahaemolyticus responsible of EMS shrimp disease or White Spot Syndrome virus. Under controlled conditions, the phytogenic was applied 21 to 28 days before challenge and then applied continuously at a preventive dose of 1 kg/tonne of feed during 21 days in tilapia and during 14 days in shrimp. Mortality post challenge was monitored until it became stable. Finally, the effect of the phytogenic was tested under farm conditions with both species in Vietnamese farms. The phytogenic was applied temporarily at a disease control dose of 4 kg/tonne of feed during 14 days in tilapia farmed in outdoors cages after streptococcal infection emergence and during 45 days in shrimp farmed in outdoors ponds after vibriosis apparition. RESULTS
In vitro results indicated that this feed additive has shown a wide bactericidal action spectrum since it exhibited high efficiency against both gram positive and gram negative bacteria (Table 1). Moreover, it showed the strongest antimicrobial activity compared to in-kind competitor products.  The experimental phytogenic presented the lowest MIC from 16 to 125 ppm whereas it was from 32 to 250 ppm for carvacrol, from 64 to 1000 ppm for citral and from 64 to 2000 ppm for eugenol (Figure 1). It also demonstrated the minimal inhibitory and bactericidal concentrations from 19 to 150 ppm and in the same order of magnitude (less than 1 log unit) for both the product and the antibiotics, strengthening the potential of the products as efficient antibiotics alternative (Table 1). In vivo, during the research trials, a significant reduction of mortality was observed (ANOVA p<0.05) regardless of farmed species and associated pathogens (bacteria or virus) as it is indicated in Figure 2.   Interest of the phytogenic was confirmed under farming conditions where it significantly supported resistance of tilapia and shrimp (ANOVA p <0.05) when challenged with Streptococcus spp. and Vibrio spp respectively (Figure 3). Economically, under non optimal conditions and a few days after a disease outbreak, performance was highly depressed and incomes from farmed animal’s sales did not compensate feed cost and farmer lost money. The application of the phytogenic helped to preserve a good profit by maintaining significant increase of survival (20% more in fish and 72% more in shrimp) and harvested biomass whereas the revenues of the control coming from the farming biomass never went up to the losses due to feed costs. This process is explained in the didactic breakeven point diagram based on tilapia trial run in Vietnamese fish farm (Figure 4). CONCLUSION
We concluded that this new feed additive provide efficient control against a variety of pathogens and could be considered as a holistic and natural way of reducing the use of antibiotics in aquaculture systems. Trial data also showed efficacy of the functional additive to counterbalance disease outbreaks and to maintain a reliable growth performance and farm profit. Moreover, this new phytogenic can be applied in wide conditions either continuously as a prophylactic agent or during certain critical periods as a therapeutic agent assuming that the optimal duration of application is at least 14 days before critical period or apparition of first disease symptoms. 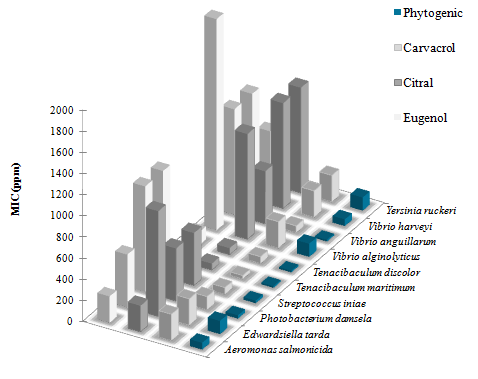 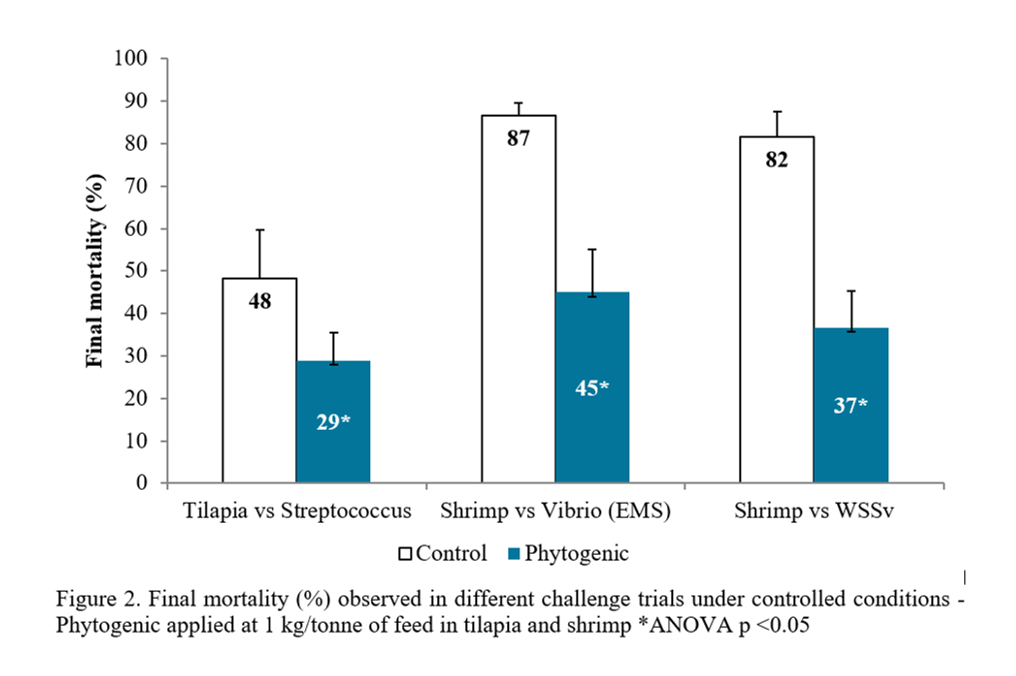 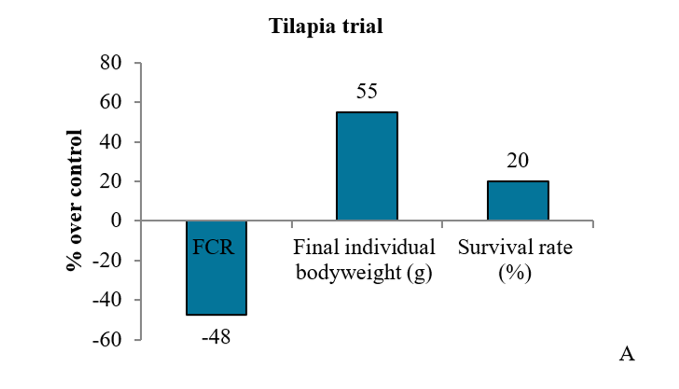 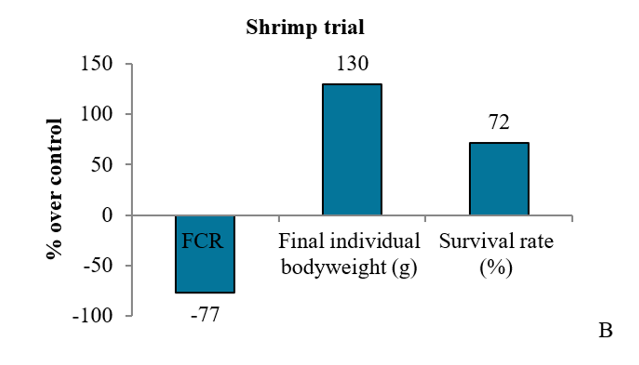 Figure 3. Final growth performance parameters in Nile tilapia (A) and White shrimp (B) trials under farming conditions expressed as % over control - Phytogenic applied at 4 kg/tonne of feed 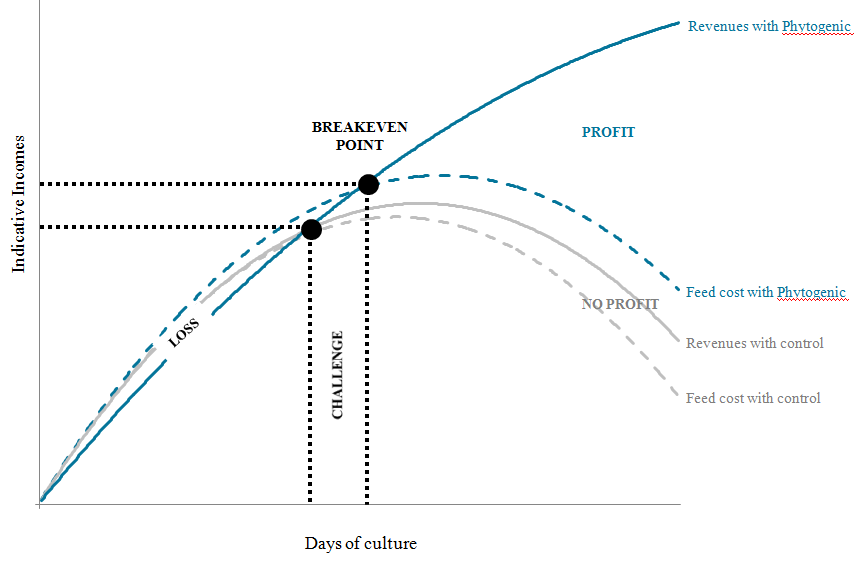